A Conversation With... SWAY.

Ahead of their fast approaching tour, we sat down with Sway to discuss their new single 'Haven', A mixed Hoagie from Magical on Sauchiehall St and the issues of writers block.

I am intrigued by the single’s title, ‘Haven,’ and would like to know a bit more about the song-writing process. What are the lyrics inspired by? What are the thoughts and feelings you want listeners to take away from this track? Was the creative process difficult for this track?

Milroy: Id like listeners to take away a feeling of hope if I was to put it poetically haha. It was a good few years ago that we wrote Haven so I struggle to remember the full process for it but I do remember it coming together quite quickly. It started with DIV coming to me with the main riff and going I want this to be a song called Haven, so it had its tittle before we even knew what it was about. Lyrically the song is about looking on at a close friend going through a tough time due to a toxic relationship and trying your best to help them get through it.

Matt: Most of the songs I've written have been based upon things that have happened to myself or friends. I try and write honestly, no matter how uncomfortable the subject matter. For example, our first single "To Be A Man" doesn't tell a particularly uplifting story, but I wrote it in the hopes that it would get people talking about a subject as delicate as sexual assault.

Do you feel that Glasgow’s reputation as a ‘City of Music’ is well founded? And if so, what does the future hold for the music scene within the city?

Milroy: Since we started playing gigs in Glasgow and even before then the city has been awash with bands and artists of all different styles from the likes of Catholic Action and the Van T's to the DUNTS and Zoe Graham who have helped give Glasgow that Reputation as a "city of Music", in terms of the future it's definitely bright. I don't think we've quite made our mark yet so there's definitely more instore from us.there seems to be some great new bands popping up every week, such as Quiche who I hadn't known about until this year's Tenement Trail.

Div: Glasgow’s music scene is thriving at the moment. With bands like The Dunts, Gallus, Rascalton and Heavy Rapids taking big strides to becoming their best and topping it each time a new track is released, the future for the music scene is bright in my eyes.

Seeking inspiration for song-writing can be a challenge. How do you as a band, and as individuals, deal with the inevitable writers’ block that can be a part of the writing process? It would also be good to know what aspects of your lives have inspired you to write music?

Milroy: Writers block has always been a problem since we all started writing together as a band but luckily enough if for example I'm struggling to come up with any new songs matt will take on a good brunt of the writing and vice versa. Usually bouts of writing block comes of when my life's going through a turbulent time and those lows are where I draw most of my inspiration from.It's a bit swings and roundabouts, when I manage to get out of a low point its when I am most inspired to write.

What do you feel is the biggest challenge for up-and-coming bands in Glasgow just now?

Milroy: Money money money, thats all there is too it. Everything else, like dirtbag promoters or getting yourself heard, can be overcome with a bit of grit. Or maybe its just me thats skint.

Matt: Personally, I think it's trying to prove that you're offering something unique. There are so many great new bands in Glasgow right now and competition is tough, so it's very easy to have a label slapped on you early doors. Prove that you've got something that's your own and you'll get the attention you deserve.

Jonjoe: trying to load into The Priory is definitely high on the list

Is there any one story or anecdote that you feel can sum up the band? It can be your founding moment, a particular practice/gig, a completely random moment etc?

Milroy: That's a tough one, What sticks out for me was when we put on our midnight show single launch in the Priory with Gallus. We hadn't played Glasgow outside of festivals like Stag & Dagger and Tenement Trail so I was a bit nervous. Doors had just opened and this sheer swarm of people seemed to erupt through the pavement. We were missing still a microphone at this point, JJ and Matt had disappeared to spoons, and nobody was watching the merch. And i'd lost count of how many people were in after 5 minutes. Everything was just back to front. By the time of our set though everything fell into place, the crowd knew all the words and belted them along with us. Quality. There's nothing that can quite rival the sensation of a packed out Priory Bar.

Div: Last year we went through to Dundee for a gig and on the way there wee Jonjoe wanted a pee break at the side of the road so we decided to chuck his empty beer bottles at him. Good times. Throwing things at JJ when hes got his hands full in general is always a good laugh.

If you had to pick another city and another musical era to live through, what would you pick and why?

Milroy: I think Manchester in the early 80's would've been a bit mad to be a part of, bands rising from the ashes of joy division, the hacienda opening its doors and the arrival of the smiths. All very cool stuff.

Matt: I don't think I'd want to experience living in another time or city. Every gig we've done in Glasgow has outweighed our expectations every time. I'm extremely grateful every time we get to play Glasgow because we see all the people that have supported us since day one.

Div: Seattle late 80’s/early 90’s. The height of the grunge scene. I adore Nirvana, Pearl Jam, Alice in Chains and Soundgarden and I just love grunge.

-Gigging late at night in the city centre can work up an appetite. What is your go-to after gig food if you’ve been playing/practicing late in Glasgow?

Milroy: Has to be a mixed Hoagie from Magical on Sauchiehall St

Matt: Jonjoe and I love a good Spoons, we've been rating them all on this tour. Perth's is in the lead so far.

Div: McDonald’s all day every day. We’ve been touring the country and all we seem to eat is a bloody Wetherspoons meal but nothing beats a dirty 5 chicken selects!

And in the spirit of festive cheer, what is your LEAST favourite Christmas song and why?

Milroy: You've asked the wrong guy, I can't get enough of them. I'll be singing all of them until February.

Matt: That one The Darkness brought out like ten year ago. That can get to fuck.

Now You Can Blog from Everywhere!

A Conversation With... SWAY. 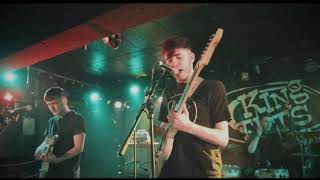